While the vast majority of water on Earth is in marine environments, freshwater is crucial to our terrestrial existence. 3.9% of Earth’s water that is not saline, only a tiny fraction represents the familiar streams, rivers, and wetlands that we associate with the term freshwater. We begin our discussion with the largest fraction of freshwater-that which is frozen at the Earth’s polar regions. We then move to streams, rivers, and lakes. 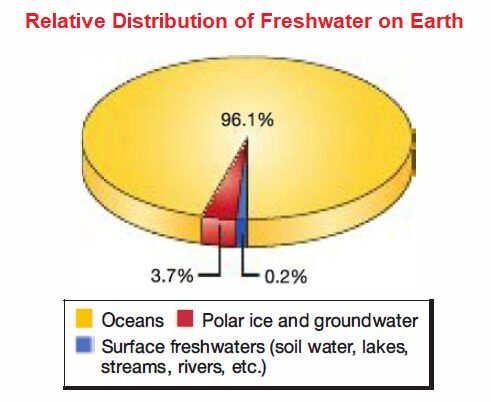 Much of the ice on Earth has remained frozen for millions of years. Indeed, it is important to note that a majority of the Earth’s surface never exceeds a temperature of 5°C. This includes polar regions, the deep ocean, and high altitude terrestrial locations throughout the world.

Surprisingly, microbes within glaciers are not dormant. Rather, evidence that active microbial communities exist in these environments has been growing over the last decade. In fact, this is an exciting time in glacial microbiology; determining the diversity in these systems and assessing the role of these microorganisms in biogeochemical cycling can involve novel and creative techniques. In addition, since the discovery of ice on Mars and on Jupiter’s moon Europa, astrobiologists have become very interested in ice-dwelling psychrophilic microbes.

The biology of lakes associated with glaciers has gained importance as it has been recognized that these ecosystems function assentinels of climate change. Glacial lakes are constrained by low temperature and reduced solar radiation, and in the Antarctic, lakes are separated from macrofauna as well. Here phytoplankton, bacteria, and protists form simple food webs almost completely devoid of multicellular organisms.

Microbial growth rates are slow, so it not surprising that primary productivity within these lakes must be supplemented by the deposition of organic carbon from the surrounding environment. Indeed, phototrophic flagellated and ciliated protists are also capable of consuming bacteria and dissolved organic carbon. These mixotrophs are not the only consumers of bacteria; most of the viruses are bacteriophages. Viral lysis of bacteria in Antarctic lakes is almost 10 times that found in similar temperate and tropical lakes.

Microorganisms in Streams and Rivers

Streams and rivers are much more dynamic than glacial lakes. Some of the physical and biological factors that help regulate the microbial communities of these freshwater systems are listed in table.

Lakes, rivers, and streams can be broadly classified as either lotic systems with free-running waters (streams, most rivers, canals) or lentic systems with free-standing waters (e.g., ponds; lakes; marshes; very broad, slow-moving rivers). In large, lentic rivers and lakes, phytoplankton thrive and are responsible for most of the fixed carbon. The biologically available carbon that is produced within the system is called autochthonous.

By contrast, the constant flow of water in streams and all but the largest rivers prevents the development of significant planktonic communities. In addition, phytoplankton growth can be further limited by the amount of available light due to overhanging foliage, turbidity, and rapid mixing of the water. In most streams and rivers, the source of nutrients therefore comes from the surrounding land. Such nutrients are called allochthonous. This distinction is important, as lentic systems often have a net autotrophic metabolism, whereas lotic systems are generally heterotrophic.

The allochthonous carbon that enters rivers and streams includes both dissolved and particulate organic carbon (DOC and POC, respectively). The amount of carbon that enters freshwater systems depends on surrounding vegetation, proximity to human activity, and local geology. In addition, hydrological factors such as how long water stays in the soil before entering the river or stream also influence the nature of the organic carbon.

Thus DOC ranges from material that can be readily assimilated to refractory carbon that only a few microbial groups can slowly degrade. Much of the particulate organic carbon includes large items such as leaf litter, which provide a substrate for fungi and bacteria to colonize. Initially, the activity of these microbes releases a pulse of water soluble DOC; this is followed by the slow leaching of nutrients that may not be as easy to assimilate.

Most rivers and streams have healthy benthic communities of attached microbes that form biofilms consumed by invertebrates and other grazing organisms. In shallow rivers and streams, some biofilms are dominated by diatoms
and other photosynthetic protists, which contribute to the total primary production of the system. Biofilms that consist primarily of heterotrophic microbes are important sources of degradation and mineralization. The role of benthic microbes in rivers and streams can be generally characterized by the microbial loop shown in figure 30.17.

As in any microbial community, when river and stream chemoorganotrophic microorganisms metabolize the available organic material, they recycle nutrients within the ecosystem. Autotrophic microorganisms grow using the minerals released from organic matter. This leads to the production of O2 during daylight hours, when the rates of photosynthesis and respiration are in dynamic equilibrium.

The release of inadequately treated municipal wastes and other materials from a specific location along a river or stream represents point source pollution. Such additions of organic matter can produce distinct and predictable changes in the microbial community and oxygen concentration, creating an oxygen sag curve in which oxygen is depleted just downstream of the pollution source. Runoff from agriculturally active fields and feedlots is an example of non point source pollution. This can also cause disequilibrium in the microbial community, leading to algal or cyanobacterial blooms.

Lakes differ from rivers and streams because they are lentic systems, thus dominated by planktonic microbes and invertebrates. The topology and hydrology of lakes are key factors in the development of these communities. Lake hydrology incorporates all aspects of water flow: the water in the lake itself, plus the inflow and outflow.

Because much of the water in a lake comes from the surrounding land, the geology and use of the land that feeds the lake largely determine the chemistry of the inflow water. For instance, mountain lakes are fed water from relatively infertile land, resulting in oligotrophic conditions within the lake.

This explains why mountain lakes tend to be so clear: microbial growth is limited to those species that can tolerate low nutrient levels. Such microbes tend to have long generation times. On the other hand, low-lying lakes generally catch water from fertile, cultivated soils and so are nutrient rich.

This supports a high level of planktonic growth, and the lakes may appear turbid. The picoplankton often include freshwater species of Synechococcus, whereas filamentous cyanobacteria such as those in the genera Anabaena and Microcystis constitute the macroplankton (microbes larger than 200μm).

Deep lakes can be divided into two main regions: the littoral zone, or shoreline, and the central, pelagic zone (these terms also apply to marine systems). The littoral region is also defined by the depth of the photic zone. The two zones have distinct microbial communities. In the littoral zone, allochthonous DOC introduces organic substrates and nutrients such as phosphate and nitrate.

Because the water is shallow, light penetrates throughout the water column, enabling the development of larger plants. Biofilms frequently form on these plants and in the sediments The microbial community within the pelagic zone is partly determined by the depth of the lake. Light penetrates the entire water column in shallow lakes (less than about 10m), so benthic autotrophs, including diatoms and cyanobacteria, may be the principle primary producers. In deeper lakes, the central, pelagic region can become thermally stratified. This is the case in temperate regions.

In the summer, the upper layer, called the epilimnion, becomes warmed and oxygen is exchanged with the atmosphere. The thermocline spans a region called the metalimnion; this region acts as a barrier to mixing of upper and lower water masses. The lower, colder region, known as the hypolimnion, can become anoxic. Because these two water masses do not mix (or mix very little), the upper layer supports a rich diversity of primary producers and consumers, which can deplete nutrients.

Just the opposite is true for the hypolimnion, where dark, anoxic, cold conditions limit growth. Nutrients accumulate and the microbial community primarily consists of benthic heterotrophs. When autumn weather cools the surface and storms physically mix the two layers, a short-lived bloom can occur as nutrients from the bottom of the lake are mixed into the photic zone. Much longer blooms may occur in the spring, when thermal stratification occurs but nutrients in the epilimnion have not yet been depleted.

Cyanobacteria capable of nitrogen fixation may dominate, reflecting the low N:P ratios frequently found in tropical lakes. Nutrient cycling in temperate lakes is largely driven by physical mixing, whereas biological processes are more important in tropical lakes. In this regard, the microbial loop shown in figure can be applied to the epilimnion of larger tropical lakes that receive few allochthonous nutrients. 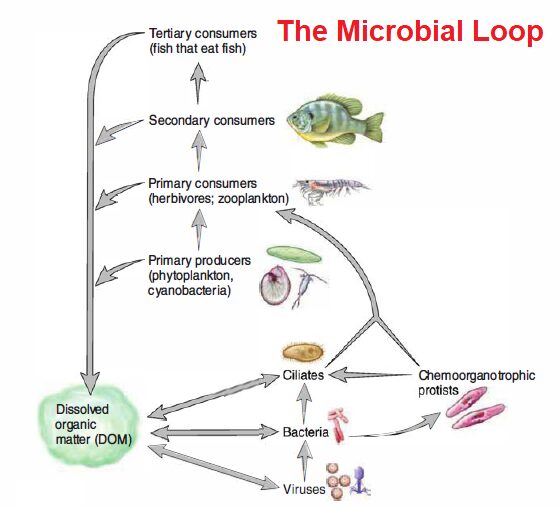 Lakes vary in nutrient status. Some are oligotrophic and others are eutrophic. Nutrient-poor lakes remain oxic throughout the year, and seasonal temperature shifts usually do not result in distinct oxygen stratification. In contrast, eutrophic lakes usually have bottom sediments that are rich in organic matter. In oligotrophic lakes, cyanobacteria that are capable of nitrogen fixation may bloom. Members of several genera, notably Anabaena, Nostoc, and Cylindrospermum, can fix nitrogen under oxic conditions.

Those in the genus Oscillatoria use hydrogen sulfide as an electron donor for photosynthesis, enabling nitrogen fixation under anoxic conditions. If both nitrogen and phosphorus are present, cyanobacteria compete with algae. Cyanobacteria function more efficiently in alkaline waters (pH 8.5 to 9.5) and higher temperatures (30 to 35°C). By using C02 at rapid rates, cyanobacteria also increase the pH, making the environment less suitable for  protists. Cyanobacteria have additional competitive advantages.

Many produce hydroxamates, which bind iron, making this important trace nutrient less available for protists. Some cyanobacteria also resist predation because they produce toxins. In addition, some synthesize odor-producing compounds that affect the quality of drinking water. These problems become magnified when cyanobacteria or protists (algae) produce massive blooms in strongly eutrophied lakes. Lake management can improve the situation by removing or sealing bottom sediments or adding coagulating agents to speed sedimentation.

1 thought on “Microorganisms in Freshwater Ecosystems”