The genetic code, presented in RNA form. Close inspection of the code reveals several features that are related not only to the way cells use DNA to store information but also to why it is valuable for storing data, as described in the chapter opening story. One feature is that the code words (codons) are three letters (bases) long; thus one small “word” conveys a significant amount of information. Each codon is recognized by an anticodon present on a tRNA molecule. 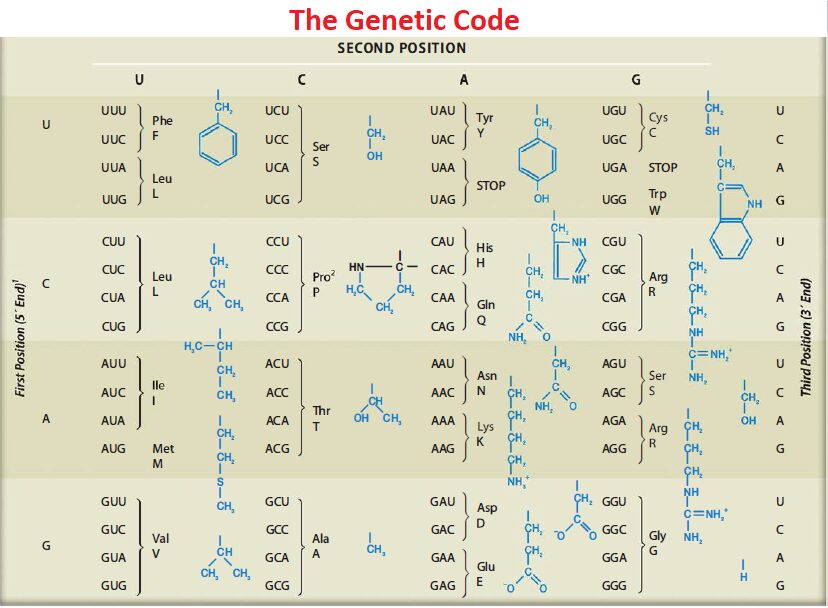 Another feature is that the code has “punctuation:’ One codon, AUG, is almost always the first codon in the protein-coding portion of mRNA molecules. It is called the start codon because it serves as the start site for translation by coding for the initiator tRNA. Three other codons (UGA, UAG, and UAA) are involved in termination of translation and are called stop or nonsense codons.

These codons don’t encode an amino acid and thus don’t have a tRNA bearing their anticodon. Thus only 61 of the 64 codons in the code, the sense codons, direct amino acid incorporation into protein. Finally, the genetic code exhibits code degeneracy; that is, there are up to six different codons for a given amino acid.

Despite the existence of 61 sense codons, there are fewer than 61 different tRNAs. It follows that not all codons have a corresponding tRNA. Cells can successfully translate mRNA using fewer tRNAs because loose pairing between the 5′ base in the anticodon and the 3′ base of the codon is tolerated. Thus as long as the first and second bases in the codon correctly base pair with an anticodon, the tRNA bearing the correct amino acid will bind to the mRNA during translation. This is evident on inspection of the code.

Note that the codons for a particular amino acid most often differ at the third position. This somewhat loose base pairing is known as wobble, and it relieves cells of the need to synthesize so many tRNAs. Wobble also decreases the effects of some mutations.

The description of the genetic code just provided is of the universal genetic code. However, there are exceptions to the code. The first exceptions discovered were stop co dons that encoded one of the 20 amino acids. For instance, some protists have a single stop codon (UGA); the other two stop codons are recognized by tRNAs bearing glutamine (Gln).

Some Exceptions to the Universal Genetic Code

8 thoughts on “The Genetic Code”