Microorganisms, in the period of their growth and metabolism, interact with one another within the cycling of nutrients, including carbon, nitrogen, phosphorus, sulfur, iron, and manganese.

This nutrient cycling, called biogeochemical cycling when applied to the environment, involves both biological and chemical processes All of the biogeochemical cycles are linked and the metabolism-related transformations of these nutrients make life on Earth possible.

The best-studied nitrogen-fixing microbes are the bacterial symbionts of leguminous plants, including Rhizobium, its α-proteobacterial relatives, and some recently discovered β-proteobacteria (e.g., Burkholderia and Ralstonia spp.).

The product of N2 fixation is ammonia (NH3); it is instantly incorporated into organic matter as an amine. The addition of eight electrons per N atom requires a great deal of energy and reducing power. The nitrogenase enzyme is thus very sensitive to O2 and must be protected from oxidizing conditions.

Aerobic and microaerophilic nitrogen-fixing bacteria employ a number of strategies to protect their nitrogenase enzymes. For example, heterocystous cyanobacteria physically separate nitrogen fixation from oxygenic photosynthesis by confining the process to special cells called heterocysts, while other cyanobacteria fix nitrogen only at night when photosynthesis is impossible.

Ammonia made by N2 fixation is instant mix with organic matter as amines. This type of amine N-atoms are present into proteins, nucleic acids, and various biomolecules.
The N cycle continues with the degradation of these molecules into ammonium (NH4+) within mixed assemblages of microbes. 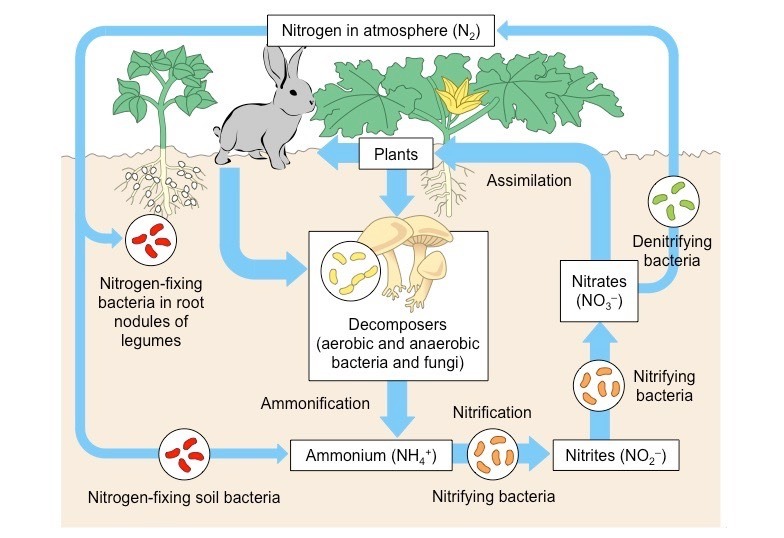 Bacteria of the genera Nitrosomonas and Nitrosococcus, for example, play important roles in the first step, and Nitrobacter and related chemolithoautotrophic bacteria carry out the second step.

In addition, Nitrosomonas eutropha has been found to oxidize ammonium ion anaerobically to nitrite and nitric oxide (NO) using nitrogen dioxide (NO2) as an acceptor in a denitrification related reaction.

Because assimilatory reduction of nitrate to ammonium is energetically expensive, nitrate sometimes accumulates as a transient intermediate. Alternatively, for some microbes nitrate provides as a terminal electron acceptor through anaerobic respiration this is a form of dissimilatory reduction.

In this case, nitrate is completely exit from the ecosystem and again returned to the atmosphere as dinitrogen gas (N2) through a series of reactions that are known as denitrification.

This dissimilatory process, in which nitrate is utilised as an electron acceptor in anaerobic respiration (in the absebse of oxygen), mainly involved heterotrophs like Pseudomonas denitrificans.

The major products of denitrification include nitrogen gas (N2) and nitrous oxide (N2O), although nitrite (NO2) also can accumulate. Nitrite is of environmental concern because it can contribute to the formation of carcinogenic nitrosamines.

Finally, nitrate can be transformed to ammonia in dissimilatory reduction by a various kind of bacteria, includes Geobacter metallireducens, Desulfovibrio spp. and Clostridium spp.

The discovery that marine bacteria perform the anammox reaction in the anoxic waters just below oxygenated regions in the open ocean solved a longstanding mystery.

For many years microbiologists wondered where the “missing” NH4+ could be—mass calculations did not agree with experimentally derived nitrogen measurements. The discovery that planctomycete bacteria oxidize measurable amounts of NH4+ to N2, thereby removing it from the marine ecosystem, has necessitated a reevaluation of nitrogen cycling in the open ocean.