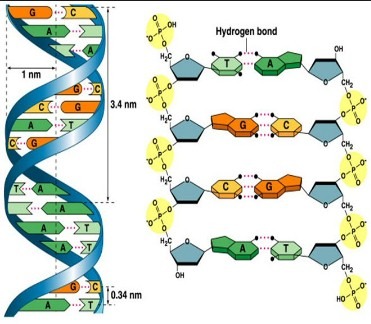 Deoxyribonucleic acid (DNA) is a polymer of deoxyribonucleotides linked together by phosphodiester bonds. It contains the bases adenine, guanine, cytosine, and thymine. DNA molecules are very large and are usually composed of two polynucleotide chains coiled together to form a double helix 2.0 nm in diameter.

The monomers of DNA are called deoxyribonucleotides because the sugar found in them is deoxyribose.

The bond that links the monomers together to form the polymer is called a phosphodiester bond because it consists of a phosphate that forms a bridge between the 3 ‘-hydroxyl of one sugar and the 5 -hydroxyl of an adjacent sugar.

The bases from each strand interact with those of the other strand, forming base pairs. The base pairs are stacked on top of each other in the center, one base pair every 0.34 nm.

The purine adenine (A) of one strand is always paired with the pyrimidine thymine (T) of the opposite strand by two hydrogen bonds. T

The purine guanine (G) pairs with cytosine (C) by three hydrogen bonds. This AT and GC base pairing means that the two strands in a DNA double helix are complementary.

The two polynucleotide strands of DNA fit together much like the pieces in a jigsaw puzzle. Inspection shows that the two strands are not positioned directly opposite one another.

Therefore when the strands twist about one another, a wide major groove and narrower minor groove are formed by the backbone. There are 10.5 base pairs per turn of the helix, and each turn of the helix has a vertical length of 3.4 A.

The helix is right-handed; that is, the chains turn counter clockwise as they approach a viewer looking down the longitudinal axis. The two backbones are anti-parallel, which means they run in opposite directions with respect to the orientation of their sugars.

One end of each strand has an exposed 5′-hydroxyl group, often with phosphates attached, whereas the other end has a free 3 ‘-hydroxyl group.

The structure of DNA just described is that of the B form, the most common form in cells. Two other forms of DNA have been identified. The A form primarily differs from the B form in that it has 11 base pairs per helical turn, rather than 10.5, and a vertical length of 2.6 A, rather than 3.4.

Thus it is wider than the B form. The Z form is dramatically different, having a left-handed helical structure, rather than right-handed as seen in the B and A forms. The Z form has 12 base pairs per helical turn and a vertical rise of 3.7 A.

Thus it is more slender than the B form. At this time, it is unclear whether the A form is found in cells. However, evidence exists that small portions of chromosomes can be in the Z form. The role, if any, for these stretches of Z DNA is unknown.

There is another property of DNA that needs to be addressed: supercoiling. DNA is helical; that is, it is a coil. Whenever the rotation of a coil is restrained in some way, it causes the coil to coil on itself. The coiling of a coil is supercoiling.

Recall that most bacterial chromosomes are closed, circular double-stranded DNA molecules. In this state, the two strands are unable to rotate freely relative to each other, and the molecule is said to be strained. The strain is relieved by supercoiling.

What is the importance of supercoiling?