Histones types and its functions

Histones are a collection of proteins that link with DNA in the nucleus and help to condense it into chromatin. They are alkaline protein and their positive charge allow them to associate with DNA. They are found inside the nucleus of eukaryotic cell.

Nucleosome consists of DNA wrapped around 8 histone protein called histone octamer. Both DNA and histone are packed all together to form nucleosome, nucleosome are a pack which are called chromatin, 2 chromatin forms a chromosomes.

Histone protein are of 2 types

Each histone protein gathered to create 1 octameric nucleosome core particle and 147 base of DNA wrap around this core particle.

H2B is also involves in the structure of the nucleosomes of the beads on a string structure.

H3 is involves in the forming of shape of chromatin in eukaryotes. Gives feature of a main globular domain and have an extended N-terminal tail. H3 is an important protein in the emerging feild of epigenetics, where its sequence varients and variables modification states are thought to play a role in the dynamic and long term regulation of gene.

H4 is involves in the structure of chromatin in eukaryotes. H4 includes acetylation and methylation, which can alter expression of genes located on DNA related to its parent histone octamers.

H1 is the main among 5 histone protein which have a components of chromatin in eukaryotes. H1 cannot make up the nucleosomes beads. It sits on the top of the structure, where the DNA that has wrapped around the nucleosomes. It is present in half of the other 4 histone, which contribute 2 molecules to each nucleosomes bead.

H5 histones are individual protein involve in the packing of specific region of DNA.

Packaging of Histones
In the core of nucleosomes the 2 dimer H2A and H2B and tetramer H3 and H4 are involve and form the tertiary structure. Histone are highly positively charge and have lysine and arginine residues. 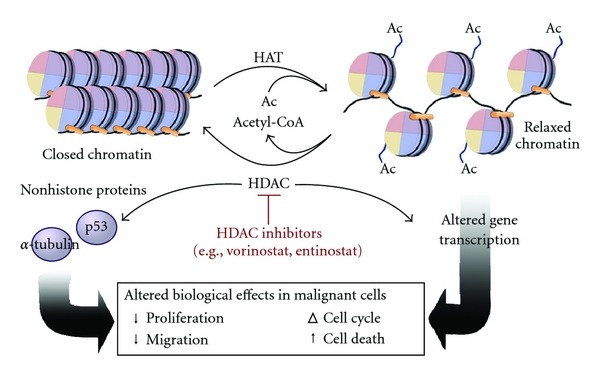 Acetylation:- All the core histone are acetylated. The major target for acetylation are lysine 1 the N-terminals tails of histones H3 & H4.

Acetylation occurs before the histones are incorporated into nucleosomes.Acetyl group are added to the lysine amino acids in the histone tail each of the core molecules. Acetylation is reversible. Enzymes that acetylated histones are acetyl transferases (HATs),  commonly known as histone acetylases.

2 group of HATs enzyme those are:

Acetylation reduces the affinity of the histones for DNA and possibly reduces the interaction between the individual nucleosomes that leads to formation of chromatin fibre.

Enzyme histone Deacetylases (HDACs) catalyze the removal of acetyl group (i.e deacetylation). The in heterochromatin are generally deacetylated whereas those in euchromatin are acetylated. 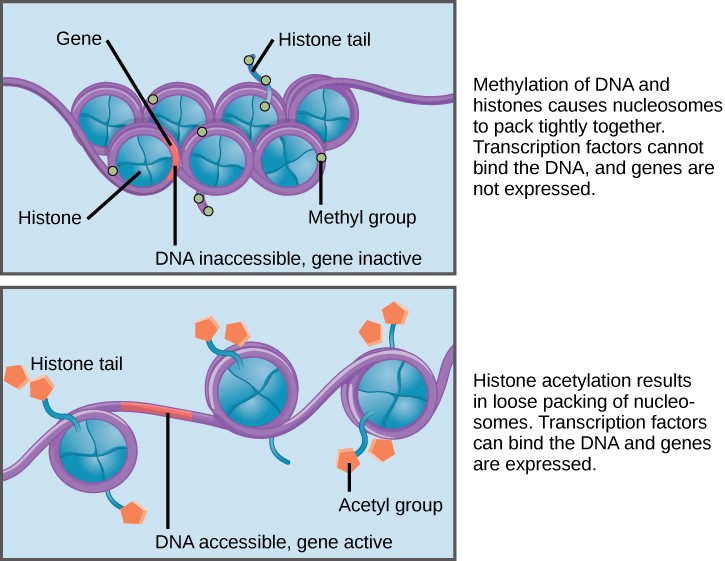 The important effect on nucleosome structure:

Methylation:- Many lysine and arginine amino acids at the N-terminus of histone undergo methylation. Methylation at lysine or arginine may be one of the three forms; mono, di, for arginines. It is catalyzed by methyl transferases. Methylation of different part of the N-terminal of H3 and H4 histones is linked with both repressed and active chromatin, depends on the particular amino acid that is modified in the histone tail.

Phosphorylation:- Histone are phosphorylated in 2 situations, cyclically during the cell cycle, In association with chromatin remodeling. It has been known that histone H1 is phosphorylated at mitosis and more recently it was discovered that H1 is an extremly good substrate for the Cdc2 kinase that controls cell division. Less of a kinase that phosphorylated histone H3 on 10 Ser has devastating chromatin structure.

The cause of disruption structure is most likely the failure to phosphorylated histone H3. This suggests that H3 phosphorylation is required to generate the more extended chromosomes structure of euchromatic regions. It is important in the cell cycle, it is likely too be a single for condensation.

Its effect in chromatin remodeling appears to be the opposite. It is of course possible that phosphorylation of different histones, or even of different amino acids add residues in one histone, has opposite effects on chromatin structure.

Histones types and its functions