Klebsiella are gram-negative, nonsporing, non-motile bacilli that grow well on ordinary media, produce pink mucoid colonies on MacConkey’s agar. They are usually found in the intestinal tract of humans and animals or free living in soil, water, and on plants.

Klebsiellae grow well on ordinary media at a temperatures between 12°C and 43°C (optimum, 37°C) in 18–24 hours. On MacConkey agar, the colonies typically appear large, mucoid and red in colour. Mucoid nature of colonies is due to capsular material produced by the organism. 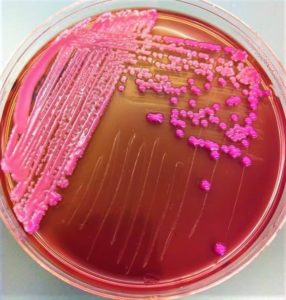 Klebsiella pneumonia is a serious disease with high case fatality. The typical patient is a middle- or older-aged man who have medical problems. Positive blood cultures can be obtained in about 25% of the cases.

Some strains of K. pneumoniae isolated from cases of diarrhea have been shown to produce an enterotoxin very similar to the heat stable toxin of E. coli.

K. ozaenae is a bacillus associated with ozena, an uncommon, chronic disease in which there is atrophy of the nasal mucosa characterized by foul smelling nasal discharge.

K. rhinoscleromatis causes rhinoscleroma, a chronic granulomatous hypertrophy of the nose. K. oxytoca may be rarely isolated from clinical specimens.

Diagnosis is made by culturing appropriate specimens on blood agar and Mac Conkey agar and identifying the isolate by biochemical reactions. Antibiotic sensitivity should invariably be done. Many strains carry plasmids determining multiple drug resistance.

They are normally susceptible to cephaloporins, especially β-lactamase stable derivatives such as cefuroxime and cefotaxime, and to fluoroquinolones. They are often sensitive to gentamicin and other aminoglycosides., but
transferable enzymic resistance to aminoglycosides and other antimicrobial agents has become common in strains found in some hospitals.

Klebsiella infection of the urine often responds to trimethoprim, nitrofurantoin, co-amoxiclav or oral cephalosporins. Pneumonia and other serious infections require vigorous treatment with aminoglycoside or a cephalosporin, such as cefotaxime.