The basic amino acid sequence which makes a polypeptide chain and folding into different confirmations leads to proteins. Proteins are composed of Motifs (when secondary structures combine, they make a motif that does not function independently) and Domains (when specific motifs and secondary structures combine, they form a domain that has a particular function and may exist independently).

Super secondary motifs are the structures that are formed by the combination of secondary structures containing alpha-helices and beta-pleated sheets. These structures are found in the globular proteins and are joined by loop, turn, or hairpin (short amino acids sequences which are required to join the alpha helixes and beta-pleated sheets) they are found in globular proteins where the bend is required. 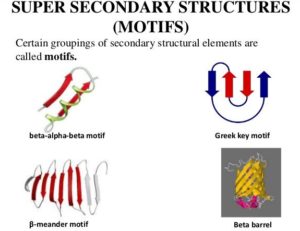 The structures are formed when alpha helixes are connected via a loop, turn, or hairpin.

This type of motif contains beta-sheets which are connected via hairpins hydrogen bonds.

The loops that connect both strands are involved in ligand binding and motif is found in ion channels.

It binds enzymes to nucleotides cofactor and also contributes to substrate binding.