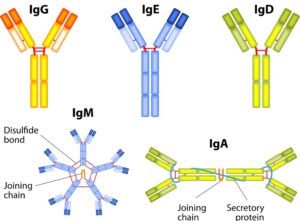 Functions of IgG: IgG is a very versatile molecule. It may be considered a general-purpose antibody, protective against those infectious agents, which are active in the blood and tissues.

Examples of its Functions

Secretory IgA (SIgA): In contrast, IgA found on mucosal surfaces and in secretions is a dimer formed by two monomer units joined together at their carboxy terminals by a glycopeptide termed as the J chain (J for joining). This dimeric form is more important form, known as secretory IgA (SIgA). Dimeric SIgA is synthesized by plasma cells situated near the mucosal or glandular epithelium. J chains are also found in other polymeric immunoglobulins such as IgM.

The secretory piece is believed to protect IgA from denaturation by bacterial proteases in sites such as the intestinal mucosa which have a rich and varied bacterial flora. Subclasses: There are two subclasses of IgA in humans: IgA1 and IgA2. 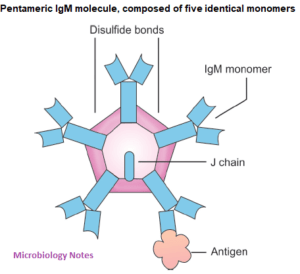 Other structurally similar proteins are seen in serum in many pathological processes, and sometimes even in healthy persons apart from
antibodies in the following pathological conditions:

The abnormal plasma cells are myeloma cells which also collect in the solid part of the bone. The disease is called “multiple myeloma”. Myeloma is a plasma cell dyscrasia in which there is unchecked proliferation of one clone of plasma cells, resulting in the excessive production of the particular immunoglobulin synthesized by the clone. Such immunoglobulins are, therefore, called monoclonal.

Bence-Jones proteins: In most patients, the myeloma cells also secrete excessive amounts of light chains. These excess light chains were first discovered in the urine of myeloma patients and were named Bence-Jones proteins, for their discoverer Bence Jones (1847). Bence Jones proteins can be identified in urine by its characteristic property of coagulation when heated to 50°C but redissolving at 70°C. These proteins are the light chains of immunoglobulins and so may occur as the kappa or lambda forms. But in any one patient, the chain is either kappa or lambda only, and never both, being uniform in all other respects also.

It is a lymphoid neoplasia characterized by the overproduction of the Fc parts of the immunoglobulin heavy chains.

It is a condition in which there is the formation of a gel or a precipitate on cooling the serum, which redissolves on warming. It may not always be associated with disease but is often found in myelomas, macroglobulinemias and autoimmune conditions such as systemic lupus erythematosus. Most cryoglobulins consist of either IgG, IgM or mixture of the two.