Omicron, the new variant of SARS-COV-2 is the topic of attention these days due to its wide spread worldwide. This variant was first identified in the patients of Botswana and South Africa. Since that time the variant has gained attention by scientists and researchers due to its increasing spread and unusual number of high mutations.

Is the Omicron more transmissible than other variants of COVID?

Is Omicron variant of concern more fatal and dangerous than previous variants?

Well, Let’s take a look at the information that has been gathered through various researches and reports prepared by WHO (World Health Organization). The new variant B.1.1.529  has been named Omicron by WHO on 26 November 2021 on the advice of TAG-VE (Technical Advisory Group on Virus Evaluation).

The variant has spread in almost 60 countries of the world except Antarctica. The first person who was reported positive was a resident of California and this was the first case of Omicron variant reported in America. Since then the variant has been identified in more than 20 states.

Why is this particular Variant of Interest (VOI) specifically known as Omicron?

You might also be thinking why is this new strain is named ‘’Omicron’’ where the other strains of COVID-19 were named as Alpha, Beta, Gamma and Delta by researchers so, why such a large scale variation has occurred? WHO has been naming the variants using the Greek alphabets . 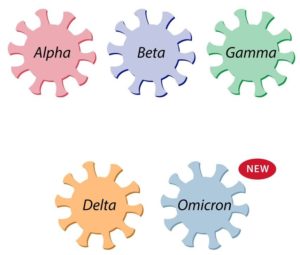 They have already used 12 letters of Greek alphabets; the next two alphabets were Nu and Xi. The word Nu was not used because it could be confused with ‘’New’’ whereas they avoided using the word Xi as it is the name of a Chinese President. Hence, WHO in one of its press conferences announced that this particular name has been chosen to avoid any kind of cultural, national or regional offense.

Scientists and researchers say that it would be too early to decide how widespread the virus would be. However, it is said that there are chances of more spread of this variant. This strain is transmissible, but till now we can not decide whether it is more transmissible than other variants of COVID especially Delta.

Moreover, if we talk about the severity of disease it is not clear that this variant is more dangerous? However, the number of cases are rising rapidly due to its increasing mutations. Some researchers also says that this variant has the same level of severity as Delta virus had. No possible reports show distinguishable symptoms of Omicron virus as compared to other strains.

According to WHO as, this strain has just evolved so, learning about its severity will take several days. It has been seen that most of the patients that are being infected are University students and young individuals. Furthermore,the risk of reinfection is also alarming, vaccination has been seen as a protective barrier and acts as a shield for protection against severity of infection and death.

The chance of reinfection: According to the information provided by WHO the people who had already been infected by any of the COVID variants are more likely to fall a prey to this variant than others. Although more accurate data will be provided after more research in coming weeks. Researchers have quoted that there was a sharp increase in infectivity rate among people who had already been affected where no such case was seen in the case of Beta or Delta virus.

Another alarming fact about the Omicron virus is that although the virus is less vulnerable to the body’s immune response. But the virus grows and spreads twice as quickly as compared to Delta virus which shows how dangerous it could be.

How effective are the tests for this variant?

The PCR test which is a diagnostic test and uses the NAAT technique (Nucleic Acid Amplification Test) is highly effective against the detection of this particular variant of interest. PCR test is very reliable and convenient to perform where the sample is inserted into the PCR machine with particular chemicals that helps in identification.

The positive results are identified by appearance of fluorescence produced with the aid of chemicals. Studies are being done to check the effectiveness of other tests like the rapid antigen test.

How much effective is Vaccination against Omicron?

The vaccine makers are although showing confidence that they can control the spread of virus because the mutating strains of Omicron virus are easily identifiable. However, people are advised to maintain a proper distance of 1 meter, wear face masks and stay hydrated.

Also, the people who have completed their 2 doses of vaccines are advised to go for a booster, as some researches also say that vaccines are seen to be less effective against the new variant. Nevertheless, it has been seen that booster acts as a protective shield in 75% of the cases.

WHO is in contact with a wide range of researchers worldwide to know more about the transmission, severity of infection and symptoms appearing due to the Omicron virus. No special symptoms have been reported in its patients however, fatigue and aches have been seen as common symptoms whereas the loss of sense of smell has not been detected yet, previously caused by other variants.

More data will be collected and analyzed to get in-depth knowledge about this virus this information is monitored by TAG-VE. All the counties are advised to increase their medical health facilitations. Nobody wants a lockdown again but in case of emergency situations WHO has advised the counties to be ready .

Furthermore, the countries are advised to give their complete data about the infectivity rate, deaths and the amount of cases report to GSAID for getting more knowledge about the severity of this virus.

Are the previous treatments still effective?

Takeaways: WHO is gathering more and more data and information through its contact with researchers to figure out how dangerous the existing strain is. The data will be available in a couple of weeks and till then the people are advised to take all the safety measures and opt for a booster to ensure their safety.