Pneumococcus, a gram-positive lanceolate Diplococcus, formerly classified as Diplococcus pneumomiae, has been reclassified as Str. pneumoniae because of its genetic relatedness to streptococcus. Pneumococcus differs from other streptococci chiefly in its morphology, bile solubility, optochin sensitivity and possession of a specific polysaccharide capsule. Pneumococci are normal inhabitants of the human upper respiratory tract.

Pneumococci are gram-positive cocci in pairs (diplococci). The cocci are about 1 μm, slightly elongated cocci, with one end broad or rounded and the other pointed, presenting a flame-shaped or lanceolate appearance. They are nonmotile and nonsporing. 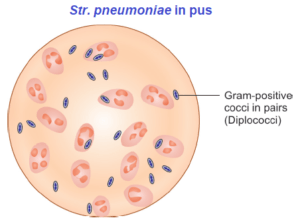 All freshly isolated strains are capsulate. The capsule encloses each pair. The capsule may be demonstrated as a clear halo in Indian ink preparations or may be stained directly by special techniques or by use of homologous type-specific antibody in the Quellung reaction. 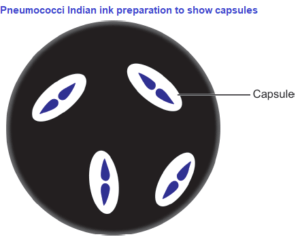 They are aerobes and facultative anaerobes. It grows best in air or hydrogen with 5–10% CO2, for which some strains have a strict requirement. Optimum temperature being 37°C (range 25–40°C) and pH 7.8 (range 6.5–8.3). Pneumococcus has complex nutritional requirements and grow only in enriched media. It grows on ordinary media, but better on media with serum, blood or heated blood.

On blood agar, after incubation for 18 hours, the colonies are small (0.5–1 mm), dome-shaped and glistening, with an area of green discoloration (alpha hemolysis) around them. On further incubation, the colonies become flat with raised edges and depressed centrally, so that concentric rings are seen on the surface when viewed from above (draughtsman or carrom coin appearance) which is due to autolysis of bacteria within the flat pneumococcal colonies.

Under anaerobic conditions, however, a zone of beta hemolysis is produced around the colony by an oxygenlabile
pneumolysin O. In liquid media such as glucose broth, growth occurs as uniform turbidity. The cocci readily undergo autolysis in cultures due to the activity of intracellular enzymes. Autolysis is enhanced by bile salts, sodium lauryl
sulfate and other surface active agents.

Pneumococci are delicate organisms and are killed by moist heat at 55°C in 10 min, and readily by most disinfectants. Most strains are highly sensitive to benzylpenicillin, other penicillins. A drug resistant Strep. pneumoniae (DRSP) strain originating in Spain has spread to most parts of the world posing problems in treament.

Optochin Sensitivity: Pneumococci are highly sensitive to killing by optochin (ethyl hydrocuprein hydrochloride),
and is useful in distinguishing on an area of a blood agar plate inoculated with pneumococcus – like colonies from the primary diagnostic plate. A growth of Pneumococcus will be inhibited in a zone extending radially for at least 5 mm from the margin of the disc on incubation. Viridans streptococci will grow right up to the disc.

The most important antigen of the Pneumococcus is the type specific capsular polysaccharide. It is also called the ‘specific soluble substance’ (SSS) as this polysaccharide diffuses into the culture medium or infective exudates and tissues. These polysaccharides are antigenic and form the basis for the separation of pneumococci into different serotypes. A total of 90 different capsular serotypes have been identified. The serotypes are designated by numbers, and those that are structurally related are grouped together (I, 2, 3. 4, 5, 6A, 68, etc.).

The tests may be done by:
1. Agglutination of washed capsulate cocci.
2. Precipitation of SSS from culture supernates.
3. Quellung reaction or capsule swelling reaction.

It was described by Neufeld (1902). In the capsule swelling or ‘quellung’ reaction (quellung= swelling), a suspension of pneumococci is mixed on a slide with a drop of the type specific antiserum and a loopful of methylene blue solution and then examined using the oil-immersion objective.

The capsule becomes apparently swollen, sharply delineated and refractile in the presence of the homologous antiserum. This reaction can be used to identify the organism directly from ‘sputum, CSF, and other sources. It used to be a routine bedside procedure in the past.

C polysaccharide: The cell wall of S. pneumoniae contains a species specific carbohydrate antigen, referred to as C substance. C-reactive protein (CRP) is an abnormal protein (beta globulin) that precipitates with the somatic ‘C’ antigen of pneumococci. It appears in acute phase sera of cases of pneumonia but disappears during convalescence. It is known as C-reactive protein because it precipitates with C antigen of pneumococci. CRP is present in low concentrations in healthy people but in elevated concentrations in patients with acute inflammatory diseases.

It is an ‘acute phase’ substance, produced in hepatocytes. Its production is stimulated by bacterial infections, inflammation, malignancies and tissue destruction. It disappears when the inflammatory reactions subside. It is used as an index of response to treatment in rheumatic fever and certain other conditions.

F antigen: The lipid bound teichoic acid in the bacterial cytoplasmic membrane is called the F or Forssman antigen because it can crossreact with the Forssman surface antigens on mammalian cells.

Pneumococci are one of the most common bacteria causing pneumonia, both lobar and bronchopneumonia. They also cause acute tracheobronchitis and empyema. Bacteremia may complicate pneumococcal pneumonia.
This can result in metastatic involvement of the meninges, joints and, rarely, the endocardium.

Lobar pneumonia: In adults, types 1–8 are responsible for about 75% of cases of pneumococcal pneumonia. In children, types 6, 14, 19 and 23 are frequent causes.

Bronchopneumonia: It is almost always a secondary infection. This may be caused by any serotype of Pneumococcus. Other causative agents responsible for bronchopneumonia include Staph. aureus, K. pneumoniae, Str. pyogenes, H. influenzae, Fusobacterium species and Bacteroides.

S. pneumoniae is among the leading causes of bacterial meningitis. It can spread into the central nervous system
after bacteremia, infections of the ear or sinuses, or head trauma.

Pneumococci may also produce suppurative lesions in other parts of the body-empyema, pericarditis, otitis media, sinusitis, conjunctivitis, suppurative arthritis and peritonitis, usually as complications of pneumonia.

S. pneumoniae is a common inhabitant of the throat and nasopharynx in healthy people. Pneumonia occurs when the endogenous oral organisms are aspirated into the lower airways. Cases are more common in winter and affect the two extreme age groups more often.

Sputum, lung aspirate, pleural fluid, cerebrospinal fluid, urine or blood are collected according to the site of lesion. Blood culture is useful in pnemococcal septicemia.

All the specimens should be collected in sterile containers under all aseptic conditions. They should be processed immediately. CSF specimen should never be refrigerated in case of delay and should be kept at 37°C (H.influenzae, another causative agent of pyogenic meningitis may die at cold temperature).

A centrifuged deposit of the CSF should be examined immediately in a Gram film in case of meningitis and presumptive diagnosis may be made by finding gram-positive diplococci both inside the polymorphs and extracellularly.

If typing sera are available, the most simple, rapid, and accurate method for the identification of pneumococci by direct examination is the quellung reaction.

Specimen is inoculated on plates of blood agar and heated-blood agar incubated in air with 5–10% CO2 for 18–24 hours. Typical colonies develop with α-hemolysis. The colonies are small (0.5–1 mm), dome-shaped and glistening, with an area of green discoloration (alpha hemolysis) around them. On further incubation, the colonies have draughtsman or carrom coin appearance.

Procedures commonly used to distinguish S. pneumoniae from the viridans streptococci are optochin susceptibility, bile solubility, and the quellung reaction. S. pneumoniae is susceptible to optochin, whereas other α-hemolytic species are resistant.

Isolation may be obtained by intraperitoneal inoculation in mice from specimens where pneumococci are expected
to be scanty. Inoculated mice die in 1–3 days, and pneumococci may be demonstrated in the peritoneal exudate
and heart blood.

In the acute stage of pneumonia, the organism may be obtained from blood culture in glucose broth. The finding of pneumococci in the blood is much better evidence of their pathogenic role in the lung than is their finding in sputum. Isolation of pneumococci from blood indicates bad prognosis.

It is especially useful in strains which are resistant.

Immunity is type-specific and associated with antibody to the capsular polysaccharide. The existence of some 90 serotypes makes a complete polyvalent vaccine impracticable. The current vaccine contains 23 different capsular
polysaccharides which is stated to give 80–90% protection.

The vaccine is immunogenic in normal adults, and the immunity is long-lived. It is not meant for only in persons at enhanced risk of pneumococcal infection, such as patients with absent or dysfunctional spleen, sickle cell disease, celiac disease, chronic renal, lung, heart and liver diseases, diabetes mellitus and immunodeficiencies, including human immunodeficiency virus (HIV) infection and renal transplant.

Vaccination is contraindicated in young children and elderly with lymphoreticular malignancies and immunosuppressive therapy.

Penicillin is the drug of choice for susceptible strains, although resistance is increasingly common. Cephalosporins, erythromycin, chloramphenicol, or vancomycin are used for patients allergic to penicillin or for treatment of penicillin-resistant strains.