Human growth hormone (hGH) is a protein hormone that is synthesized in the pituitary gland at the base of the brain. This hormone is involved in controlling both growth and stature. Preparations of hGH are used to treat children with ‘hypopituitary dwarfism’, a congenital disease in which the pituitary fails to secrete sufficient hGH for normal growth. This hormone cannot be administered orally, but must be injected. The standard dose is 0.5–0.9 IU/kg body weight per week. In addition, hGH has therapeutic value in the treatment of a range of other diseases, particularly those associated with ageing, and in wound healing.

This hormone is a single protein chain that is synthesized in the body as a precursor, prehormone, composed of 217 amino acids. The pre-hormone contains a signal sequence of 26 amino acids that is enzymatically cleaved to give the biologically active protein. Active hGH has a molecular weight of 21500Da and consists of 191 amino acids with two disulphide bonds linking cysteines at positions 53 and 165, and 182 and 189.

The first clinical application of hGH to treat dwarfism was in 1958, using hormone extracted from the pituitary glands of human cadavers. Its manufacture required almost 40 pituitary glands per patient per year, and consequently, the product was in short supply. In 1985 this product was withdrawn from the market, as use of these hGH preparations was directly linked with the development of a human encephalopathy called Creutzfeldt–Jakob disease (CJD). The causative agent of CJD is still not known for certain and at least two theories have been proposed: an unidentified slow virus, or a prion protein that copurifies with hGH.

The prion theory involves a protein that changes the conformational shape of other proteins, whereupon they become resistant to the natural proteases in the human body, resulting in the formation of characteristic myeloid patches in brain tissue. A similar problem happened in the early 1980s when haemophiliacs were infected with HIV, which had copurified with blood clotting factor VIII from human blood. Both problems illustrate the potential dangers of animal and human products, and the vital importance of full characterization of such products, especially for the presence of contaminants.

A search for alternative sources of hGH started with animal-derived products, but bovine and porcine growth hormones were found to be ineffective. Greater quantities of a safer supply are now provided through recombinant hGH, which began development in the late 1970s. Two companies, Kabivitrum in Sweden and Genentech in the USA, formed a joint venture to develop a recombinant DNA-derived hGH. However, at that time production of recombinant products was not permitted in Sweden, so the work was carried out in the USA.

The original recombinant DNA systems used the biologically active hormone DNA sequence inserted into a plasmid vector that was used to transform the bacterial host E. coli. The resulting protein contains 192 amino acids, its additional amino acid being a N-formylmethionine located at the N-(amino)-terminal end of the protein (i.e. N-formylmethionyl-hGH). This amino acid is used as the initiator of protein synthesis in most bacteria. In some bacterially synthesized proteins this extra amino acid is cleaved post-translationally, but in this case it is not removed.

There was some initial concern that the extra amino acid might be immunogenic and could cause an immune reponse within patients. As a result, attempts were made to develop enzymatic steps to remove the extra amino acid, but this proved difficult. However, this product, N-formylmethionyl-hGH, had no apparent clinical differences to pituitary-derived hGH and Genentech began marketing their product (Protropin) in 1985. It was the second recombinant pharmaceutical to be approved for clinical use after recombinant insulin. 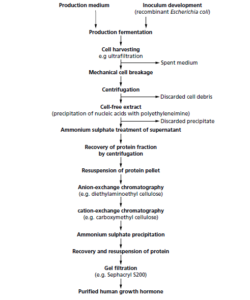 An alternate approach to recombinant hGH production is to clone the prehormone, containing 217 amino acids, and then enzymically cleave the 26 amino acid signal peptide sequence to yield the biologically active product. Other researchers have also used different hosts, including Bacillus subtilis and P. aeruginosa, which produce soluble product in the periplasmic space. Animal cell culture using mouse and human cell lines is also a possible route of hGH production.