The term beer is given to non-distilled alcoholic beverages made from partially germinated cereal grains, referred as malt. They include ales, lagers and stouts, which normally contain 3–8% (v/v) ethanol. Their other main ingredients are hops (giving beer a characteristic flavour and aroma), water and yeast.

The brewing process is essentially divided into four main stages:- 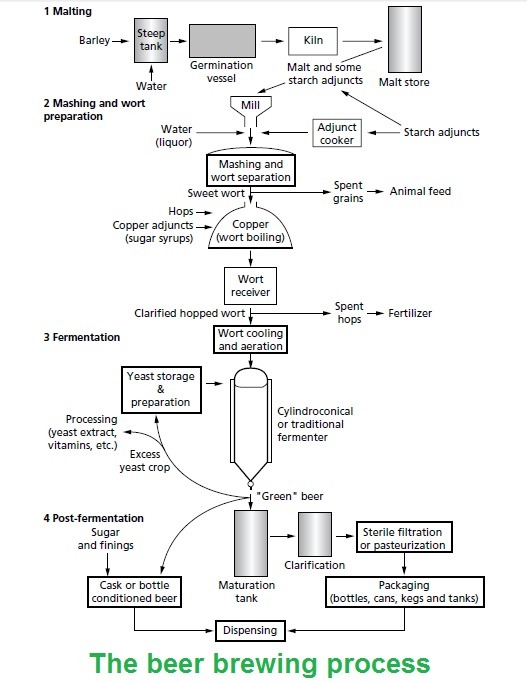 Malting is the partial germination of cereal grain for 6–9 days to form malt. This is the primary beer ingredient and contains mostly starch, some protein and hydrolytic enzymes. Malted barley is predominantly used, but beers are also made with malted wheat, occasionally malted oats and even malted sorghum.

Mashing and wort preparation involves the production of the aqueous fermentation medium, otherwise known as wort. It contains fermentable sugars, amino acids and other nutrients, and is prepared by solubilizing malt components through the action of endogenous hydrolytic enzymes.

In most countries, a proportion of adjuncts are now also added, which are unmalted cereal and non-cereal starch sources, and sugar syrups. The resulting liquid wort is then ‘sterilized’ by boiling at the same time hops are added to impart their bitter flavour and characteristic aroma. Overall, wort preparation takes approximately 5–8 h.

Yeast fermentation is a non-aseptic batch process that uses a starter culture of a selected brewing strain of S.cerevisiae. The inoculated wort undergoes an alcoholic fermentation to produce ethanol, CO2 and minor metabolites that contribute to flavour and aroma. Fermentations usually last for 2–7 days depending upon the type of beer being produced.

Post-fermentation treatments are conducted to mature or condition the new beer to make it ready for consumption, which may take from one to several weeks.

The raw materials, excluding hops, the preparation of the wort and the yeast fermentation, are essentially the same for the production of both whisky and malt vinegar. However, the major objectives are somewhat different. For whisky and vinegar production, the main aim is to maximize alcohol production prior to the respective steps of distillation and acetification.

In beer brewing, ethanol production is rather less crucial, as development of sound flavour profile and other quality factors is equally important.

Traditionally, all necessary enzyme activities for the process were provided by the malt, which generates the wort, along with yeast enzymes, that convert wort components to ethanol, CO2 and flavour compounds.

However, commercial enzymes are now employed when raw materials are enzyme deficient, or to produce novel products, or act as aids in processing and in product stabilization.