Early bacterial vaccines consisted of whole cultures of bacteria that had been inactivated by heat or formaldehyde, but now they can be divided into two categories, living vaccines and Inactivated forms of vaccines.

Microbial protein toxins can serve as vaccines following their inactivation with formaldehyde or heat to form toxoids. Vaccination with an antigenic toxoid vaccine leads to the generation of antitoxin that neutralizes the pharmacological effect of active toxin. These vaccines have been successful against Gram-positive bacteria responsible for diphtheria, tetanus and several other diseases caused by Clostridium species. Similar toxoid vaccines employed to counter some Gram-negative bacterial diseases have proved to be less effective. However, their surface antigens, some of which are involved in their adhesion to epithelial tissues, have been used to develop effective vaccines.

Vaccine production requires highly controlled operating conditions and strict adherence to good manufacturing practices. It normally involves the growth of bacterial cultures in sophisticated high-grade fermenters of usually no greater than 1000 L capacity. The fermentations are designed for optimized yield of antigen (cells or cell components) and containment, involving the very strict adherence to protocols that prevent bacterial release into the environment. Internal pressures never exceed atmospheric pressure, to reduce the risks of leakage, and exhaust gases from fermenters must pass through sterilizing filters, incinerators or both.

Fermentations for the production of vaccines based on whole cells aim to maximize biomass production. For inactivated whole cell vaccines, downstream processing usually follows cell inactivation by heat treatment or the addition of formaldehyde. The microbial cells, inactivated or live, are then separated from the medium by centrifugation. All harvesting equipment incorporates absolute microbial containment and is situated within a room maintained under negative pressure, so that any escape is contained. Live attenuated vaccines are usually prepared as freeze-dried products.

For the production of vaccines based on toxins or surface antigens (cell wall or capsular components), the growth conditions are aimed at producing maximum levels of these specific cellular antigens. Excreted toxins and loosely bound surface antigens that are shed into the medium are purified from the clarified culture broth and the harvested cells are safely discarded. As mentioned above, toxins are usually inactivated by treatment with heat or formaldehyde to become bacterial toxoids that have no toxicity, but retain their antigenicity. However, in some cases, notably Clostridium botulinum toxin, the active neurotoxin is also prepared for other therapeutic uses. 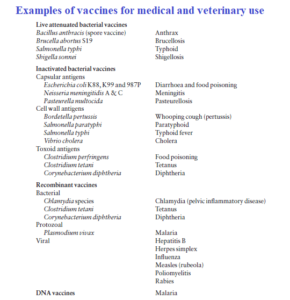 Vaccine antigens for human immunization are highly purified. Purification procedures may include conventional ammonium sulphate precipitation techniques and various chromatographic steps. Affinity chromatography is usually incorporated, utilizing specific antibodies as ligands, preferably monoclonal antibodies. For maximum effectiveness as a vaccine, the purified antigens are adsorbed onto an adjuvant that increases the immunizing power. Adjuvants include mineral salts, such as aluminium hydroxide and potassium aluminium sulphate, or water-in oil emulsions. For some diseases with a number of serotypes, blends of antigens are used in the final vaccine.

Vaccine preparations can be injected parenterally or administered orally. Inactivated forms are usually injected and living vaccines are mostly taken orally, particularly those for enteric diseases. Injected vaccines stimulate antibody production in the bloodstream, whereas oral vaccines stimulate local production of antibody at the mucosal surface of the intestine.

Viral vaccines were previously available only via culture in live animals or from animal tissue and cell cultures. However, genetic engineering has allowed the production of recombinant viral vaccines through the cloning of viral antigens into an appropriate host microorganism. For example, the virulence factor of hepatitis B and viral protein of foot-and-mouth disease virus can be expressed in E. coli for the production of valuable vaccines; recombinant hepatitis B vaccine alone has worldwide sales worth over US$1000 million.

Also, the safe production of recombinant vaccines for dangerous bacterial pathogens is now possible, using benign host organisms well suited to large-scale fermentation. This has the added advantage that the host can be manipulated to amplify antigen production. Some lactic acid bacteria are suitable hosts and are being evaluated for use in oral immunization. These bacteria have generally recognized as safe (GRAS) status and low immunogenicity, and can be used to express antigens, such as fragments of tetanus and diphtheria toxins.