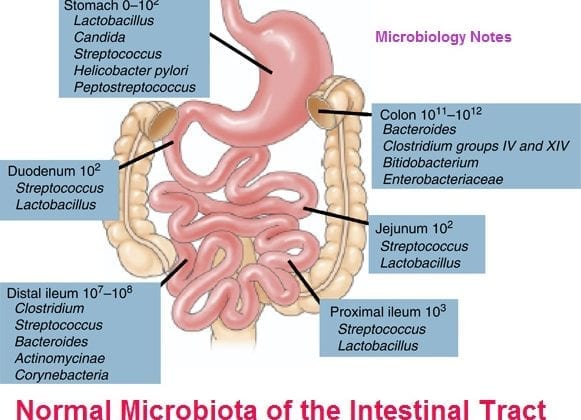 Normal Microbiota of the Intestinal Tract

The human gastrointestinal tract is divided into sections, allowing digestion and nutrient absorption in the proximal region to be separate from the vast microbial populations in the large intestine.

At birth, the intestine is sterile, but organisms are soon introduced with food. The environment (eg, maternal vaginal, fecal, or skin microbiota) is a major factor in determining the early microbial profile.

In normal adults, the esophagus contains microorganisms arriving with saliva and food. The stomach’s acidity keeps the number of microorganisms at a minimum (102–103/mL of contents) unless obstruction at the pylorus favors the proliferation of gram-positive cocci and bacilli. The
normal acid pH of the stomach markedly protects against infection with some enteric pathogens (eg, Vibrio cholerae).

As the pH of intestinal contents becomes alkaline, the resident flora gradually increases. In the adult duodenum, there are 103–104 bacteria/mL of effluent; with higher populations in the jejunum, 104–105 bacteria/mL, and ileum, 108 bacteria/mL; and in the cecum and transverse colon, 1011 bacteria/mL.

In the upper intestine, the bacterial population associated with the mucosa include the phylum Bacteroidetes and members of the Clostridiales, and those of the lumen can include members of the Enterobacteriales and enterococci.

In the sigmoid colon and rectum, the bacteria constitute about 60% of the fecal mass. Anaerobes out number facultative organisms by 1000-fold. In diarrhea, the bacterial content may diminish greatly, but in intestinal stasis, the count rises.

In a normal adult colon, 96–99% of the resident bacterial flora consists of anaerobes. Six major phyla predominate; these are Bacteroidetes, Firmicutes, Actinobacteria, Verrucomicrobiota, Fusobacteria, and Proteobacteria. More than 100 distinct types of organisms, which can be cultured routinely in the laboratory, occur regularly in normal fecal flora.

There are more than 500 species of bacteria in the colon, including many that are likely unidentified. In addition to Bacteria and Archae, other types of microbes are present, such as protozoans and fungi. Viruses, mostly phages whose hosts are prominent members of the microbiota, are remarkably common in the colon.

The important functions of intestinal microbiota can be divided into three major categories:

The first of these are protective functions in which the resident bacteria displace and inhibit potential pathogens indirectly by competing for nutrients and receptors or directly through the production of antimicrobial factors, such as bacteriocins and lactic acid.

The third category consists of a broad range of metabolic functions. The microbiota of the small intestine can contribute to the amino acid requirements of the host if they are not provided by the diet itself. Intestinal bacteria produce short-chain fatty acids that control intestinal epithelial cell differentiation. They synthesize vitamin K, biotin, and folate and enhance ion absorption.

Certain bacteria metabolize dietary carcinogens and assist with fermentation of nondigestible dietary residue. There is now evidence that gut bacteria can influence fat deposition in the host, leading to obesity.

Intentional suppression of the fecal flora is commonly done by the preoperative oral administration of insoluble drugs. For example, neomycin plus erythromycin can in 1–2 days suppress part of the bowel flora, especially aerobes.

The anaerobic flora of the colon, including B fragilis, clostridia, and peptostreptococci, plays a main role in abscess formation originating in perforation of the bowel. Prevotella bivia and Prevotella disiens are important in abscesses of the pelvis, originating in the female genital organs. Similar to    B fragilis, these species are penicillin resistant; therefore, another agent should be used.

Although the intestinal microbiota are normally an asset for the host, in genetically susceptible individuals, some components of the flora can result in disease. For example, inflammatory bowel diseases are believed to be associated with a loss of immune tolerance to bacterial antigens.

This leads to intense inflammation caused by an exuberant immune response. Similar mechanisms may be important in intestinal malignancy such as colon cancer.

Normal Microbiota of the Intestinal Tract