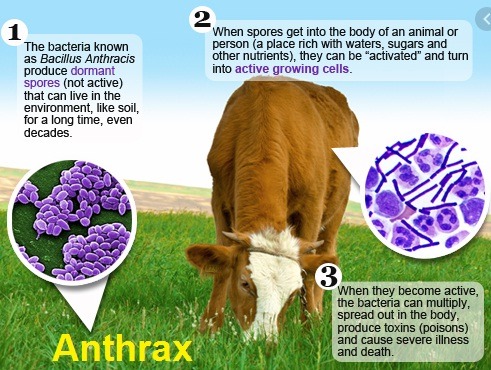 Anthrax refers to a pulmonary disease that is caused by the bacterium Bacillus anthracis. This disease has been present since antiquity.

Accounts by the Huns during their sweep across Eurasia in 80 A.D. describe mass deaths among
their horse and cattle by anthrax. These animals, along with sheep, are the primary targets of anthrax.

Loss to European livestock in the eighteenth and nineteenth centuries stimulated the search for a cure. In 1876, Robert Koch identified the causative agent of anthrax.

The use of anthrax as a weapon is not a new phenomenon. In ancient times, diseased bodies were used to poison wells, and were catapulted into cities under siege. In modern times, research into the use of anthrax as a weapon was carried out during World Wars I and II. In World War II, Japanese and German prisoners were subjects of medical research, including their susceptibility to anthrax.

Allied efforts in Canada, the U.S. and Britain to develop anthrax-based weapons were also active. Britain actually produced five million anthrax cakes at the Porton Down facility, to be dropped on Germany to infect the food chain.

Humans acquire anthrax from exposure to the natural reservoirs of the microorganism; livestock such as sheep or cattle or wild animals. Anthrax has been acquired by workers engaged in shearing sheep, for example.

All three forms of the infection are serious, even lethal, if not treated. With prompt treatment, the cutaneous form is often cured. Gastrointestinal anthrax, however, can still be lethal in 25–75% of people who contract it. Inhalation anthrax is almost always fatal.

Bacillus anthracis can live as a large “vegetative” cell, which undergoes cycles of growth and division. Or, the bacterium can wait out the nutritionally bad times by forming a spore and becoming dormant. The spore is designed to protect the genetic material of the bacterium during hibernation.

When conditions are conducive for growth and reproduction the spore resuscitates and active life goes on again. The spore form can be easily inhaled. Only 8,000 spores, hardly enough to cover a snowflake, are sufficient to cause the pulmonary disease when they resuscitate in the warm and humid conditions deep within the lung.

The dangers of an airborne release of anthrax spores is well known. British open-air testing of anthrax weapons in 1941 on Gruinard Island in Scotland rendered the island uninhabitable for five decades.

In 1979, an accidental release of a minute quantity of anthrax spores occurred at a bioweapons facility near the Russian city of Sverdlovsk. At least 77 people were sickened and 66 died. All the affected were some four kilometers downwind of the facility. Sheep and cattle up to 50
kilometers downwind became ill.

Three components of Bacillus anthracis are the cause of anthrax. First, the bacterium can form a capsule around itself. The capsule helps shield the bacterium from being recognized by the body’s immune system as an invader, and helps fend off antibodies and immune cells that do try to deal with the bacterium. This can allow the organism to multiply to large numbers that overwhelm the immune system.

The capsule also contains an antigen that has been designated a protective antigen. The antigen is protective, not to the host being infected, but to the bacterium. The protective antigen dissolves protein, which can allow the bacterium to “punch” through the membrane surrounding cells of the host, such as the epithelial cells that line the lung. One inside the cells, a bacterium is safe from the host’s immune defenses.

A second toxic component, which is called lethal factor, destroys immune cells of the host. Finally, a third toxic factor is known as edema factor (named because it results in the accumulation of fluid at the site of infection).

Edema factor disables a molecule in the host called calmodulin, which is used to regulate many chemical reactions in the body. The end result of the activity of the toxic factors of Bacillus anthracis is to quell the immune response and so, to allow the infection to spread.

As the bacteria gain a foothold, toxins enter the bloodstream and circulate throughout the body causing destruction of blood cells and tissues. The damage can prove to be overwhelming to treatment efforts and death occurs.

Anthrax infections are difficult to treat because the initial symptoms are similar to other, less serious infections, such as the flu. By the time the diagnosis is made, the infection can be too advanced to treat.

A vaccine for anthrax does exist. But, only those at high risk for infection (soldiers, workers in meat processing plants, anthrax research scientists) have received the vaccine, due to the possible serious side effects that can occur. Work to establish a safer vaccine is underway.

The edema factor may be a potential target of a vaccine. Another promising target is the protective antigen of the capsule. If the action of this antigen could be blocked, the bacteria would not be able to hide inside host cells, and so could be more effectively dealt with by the immune response and with antibiotics.